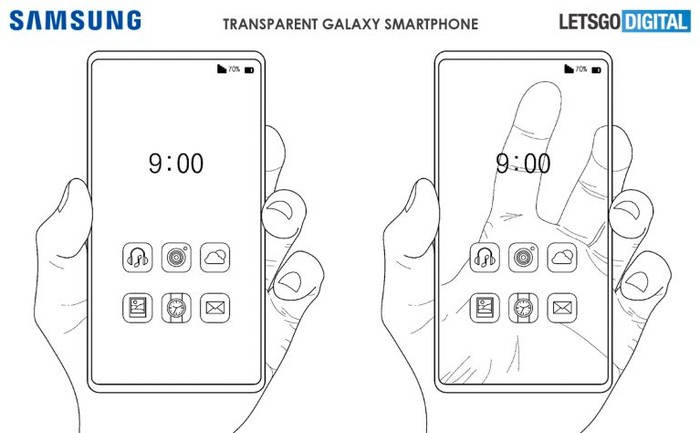 A recent patent filed by Samsung shows a transparent smartphone design with a thin bezel. This device matches the new screen technology that Samsung is developing.

Based on the information in the patent document, this registered technology makes the device appear completely transparent. To help visualize this futuristic design, LetsGoDigital collaborated with 3D artist Giuseppe Spinelli to create images of a series of renders from this patented technology.

If you look at the sketch image, you can imagine how the Samsung cellphone looks transparent like glass so that it shows a translucent hand holding the cellphone on the back.

Quoted from Phone Arena, so far the device is purely a concept. There are many other design aspects that need to be further developed to allow for the transparent phone as depicted.

Samsung also needs to make a transparent version of the phone's internal components, and figure out how to fit it into a super-thin bezel. Certainly not an easy task to make it happen. The question also arises, does anyone want a transparent cellphone?

However, this kind of display may have a number of advantages, such as the touch screen feature on both sides. Transparent phones can also provide a richer augmented reality (AR) experience.

It's not just Samsung who is interested in the idea of ​​a transparent smartphone. In 2018, Sony has also registered a patent for the transparent screen concept. OnePlus has also expressed a similar idea which it calls the Concept One.

For now, this ultramodern and futuristic smartphone design sounds like a dream. But who knows in the future, this form of cellphone will become a reality.